Our Great Room needed a overhaul basically because we were getting rid of all the country look in the kitchen. The furniture we had in here really lasted a long time considering it was cheaper furniture and had kids jumping all over them for the past 8 years. Ken’s number one priority for the Great Room was to get a flat screen TV that he could mount on the wall. We did our homework and ended up buying a Samsung 58″ Widescreen Plasma HDTV. We ordered it from Amazon since no one near us had it in stock and shipping was free through Amazon at the time. Unfortunately the first TV we received was defective and we had to ship it back. The screen was shattered, although still all in one piece. It sort of worked out because we used the defective TV to install the mount on the wall, just in case we dropped it or something! The TV itself is only 1.2″ deep and the mount that we bought from Chief Manufacturing is super thin as well. We spent hours deciding where to hang the TV. First this wall, then that wall…when in reality what we really wanted was to hang the TV above the fireplace, but we didn’t want to have to crane our necks to watch the TV. In the end we opted to remove 2 layers of brick from our fireplace to lower the height of the TV once it was hung. This was a super messy job.

Here they are trying to keep the dust from sawing away at the bricks from flying through the house. Fail!! Dust was everywhere! After the mess was cleaned up from the fireplace we had Don make us a 6 inch wide piece of granite for the top of the fireplace. He made it out of coffee brown granite, which is the same thing we have for our kitchen island. Other than the fireplace the only other major change was painting the walls a darker beige and I painted the TV wall a shade of red- 3 coats! I did all the painting! I am so sick of painting.

We ordered new furniture which was finally delivered 3 months after we ordered it. Funny thing…when we ordered the furniture the week before Thanksgiving we were told it would arrive in a couple of weeks. After 3 weeks and no phone call, we called them and they kept giving us different dates. Finally Ken got fed up with getting the run around and he called the corporate offices. One of the big wigs arranged for us to have temporary brand new furniture so we could have new furniture for the holidays. Really we didn’t care and we could have survived with the old stuff, but it was the point that they lied over and over again. Also with the discounts we received we ended up getting back almost $600! Again we didn’t go overboard on the amount we spent on the furniture because our kids still act like a bunch of monkeys. We got the couch, loveseat, leather storage footstool, and big round chair from Furniture Row/Sofa Mart. As of right now I still have the same end tables. I do have some flat black paint to paint them, but just haven’t made it a priority. The tops are a little banged up so part of me does want to get new ones. However the kids love the drawers in the tables and they store their Nintendo DSi’s and games and stuff in there. See, I told you I was undecided! (sorry…covering up any peaks into the kitchen, not ready to share yet!) In this corner we bought a small black entertainment type cabinet to store our cable box, receiver, PS3, and DVD player. We almost bought a Blueray player, but opted for a PS3 because it is about the same price. The kids still play Little Big Planet and never get bored with it unlike most games. We got this cabinet from Oak Express, which is also part of Furniture Row. The red curtains and artwork above the loveseat (above) is from Bed, Bath, and Beyond. The floor lamp and small lamp on top of the corner cabinet are from Lowe’s. The Blossom Tree Wall Decor hanging on the wall by the window is from Pier 1 Imports. I could spend so much money at Pier 1, unfortunately my house is only so big.

Recently Ken bought me this Eiffel Tower from Target for one of the end tables. So cute! 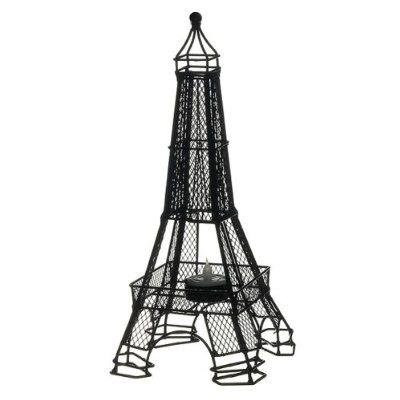 I also have a couple of other items picked out that I would like to buy eventually. I would really like this Microsuede bench from Target. I would put it right underneath the large clock I have on the wall. 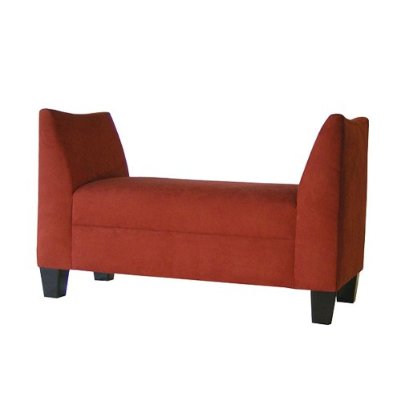 I would also like to order a couple of these storage units from Target as well. I would like to put two of them close together on the wall near the fireplace to use for storage for the kids Wii and PS3 video games, controllers, movies, etc. When I get those I may do away with the end table on that side of the room and finally replace the other one with something plain. 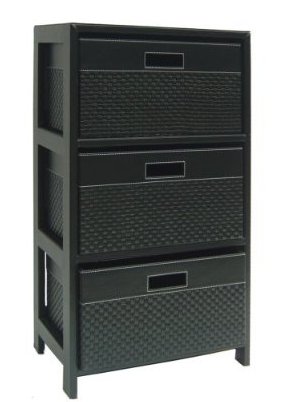 One final look of before and after next to one another… 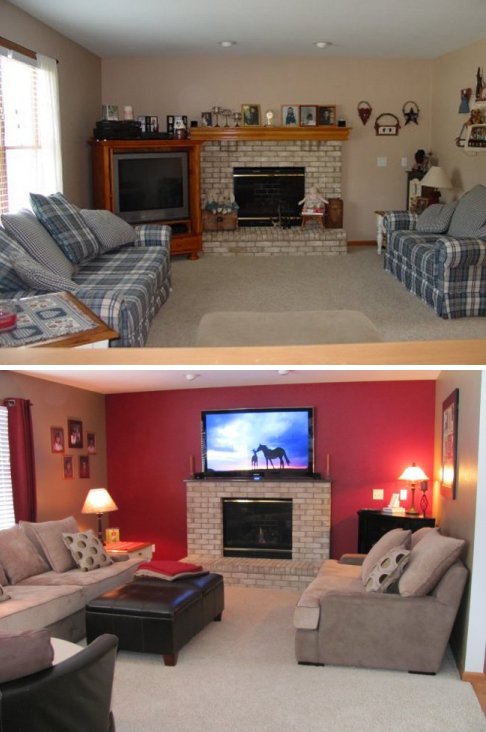 Next up…the kitchen. Still have a few things to complete before I share photos.