Day 01 — Something you hate about yourself

One thing that I hate about myself, most of the time…is that I am not a very trusting person, in particular with Ken. I think it’s a combination of what I went through with Andrew’s dad a long time ago and years of other experiences that have left me not trusting to many people in my life. Unfortunately Ken has had to go through some difficult situations with me because of this, but he has always been pretty understanding and supportive of my feelings. I would like to say that I have gotten better as the years have gone by, but really I haven’t. It’s just now Ken and I are together almost all the time so there are very few moments that I am left to worry about things. I can also say that I don’t feel as though Ken trusts me 100% either. Some may think that it’s sweet that we still worry about losing one another after all these years. Others may roll their eyes and say that they could never be married to someone who doesn’t allow them to do whatever they want, whenever they want. It’s just the way we are and it works for us. But…that doesn’t mean that it doesn’t bother me that I don’t trust him or others.

We celebrated our 11 year anniversary on Saturday. Well celebrate is not the right word since we didn’t do anything since Andrew had Homecoming. But we had a great weekend anyways, complete with a new ring that Ken got me. He had my original engagement diamond put into a Platinum setting. It’s gorgeous and I can’t stop starring at it. We are lucky to have one another! Our lives can get a bit crazy with all these kids of ours, but I wouldn’t want it any other way. 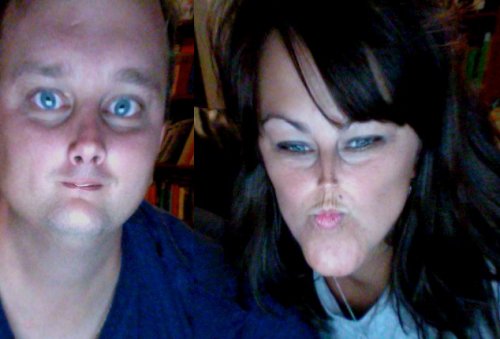 Check out Andrew’s pics from Homecoming here! He had a great time and even though he argued with me before the dance, saying that he probably wouldn’t stay that long because it would be boring…him and his friends had a blast and they stayed almost the entire time and danced until their legs hurt! He met his girlfriend there (they haven’t been going out all that long, plus they are just Freshman!) and I am bummed that they didn’t have any formal picture booths set up, so I have no pictures of them together.