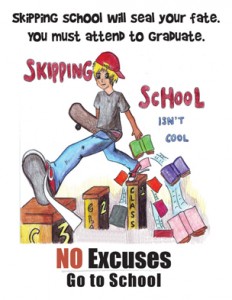 Did I ever tell the story of the day I got caught skipping school? I was thinking about this the other day because of how different kids have it now compared to back when I was in high school. Nowadays if your teen has a cell phone it’s pretty easy to track where they are. With online grades and attendance records I can see immediately if my son doesn’t attend a class. It would be pretty hard for him to skip school without getting caught.

I’ll never forget the day I was caught by my father. I was skipping school with Andrew’s dad and we were heading to breakfast one morning. As we were sitting at a light, getting ready to turn left, we both noticed my dad’s car drive by. Andrew’s dad drove a bright red El Camino which was a rare car, so you couldn’t miss it. As soon as we seen my dad’s car we high tailed it back to school. We were walking as fast as we could from the parking lot to try and get into the school building without getting caught. Just as we were about to walk into the school my dad pulled up in his van.

Right away my boyfriend says, “Just say we were going to pick up my friend.”
My dad yelled, “Come here!”
When I walked up to his car he asked, “Where do you think you were going?”
I replied, “To go pick up our friend Michelle.”
“Michelle who?”, he asked.
I said, “Michelle Tanner” (Yes, that was the youngest girl on Full House…apparently I was a big fan.)
My dad then yelled for my boyfriend to come here.
I turned to face him so I could mouth the word- MICHELLE – to him so he knew who our alibi was.
He walked up and my dad asked, “Where were you guys going?”
Boyfriend replied, “To pick up my friend”. (Ahhhh, we are SO GOOD!!)
My dad then asked, “Who?”
Boyfriend glances at me and quickly says, “Bob.”
“Get your ass in to school.” My dad said and then off he went.

Dang!!! So close! But duh, like come on…how stupid were we?
So moral of the story is when you think you are gonna pull something off like that get all the fine details straight before you try and talk your way out of it.

Oh and I only got grounded for a week for that little stunt. I wasn’t a big school skipper, but we did learn to not drive around on the main roads from there on out.