What I’ve been reading

For those who may not know Ken and the kids got me a Kindle for Mother’s Day this year. I absolutely love everything about it. I think Amazon.com dropped the price recently too, so for those who love to read it would be a great item to put on your Christmas list! If I had to think of something that I don’t like about it, I would have to say that it bothers me that I don’t know how far I have to go until I am finished with the book. The Kindle will say, 20% completed or whatever, but it’s not the same as holding the book in your hands and knowing how much further you have to go before the book is over or that particular chapter.

I had recently downloaded a few books and I have to admit that they just can’t keep my interest. Let me know if you have read this and if I should keep reading!

2. Firefly Lane by Kristin Hannah – just can’t get hooked, although everyone swears this book is amazing

3. Dead and Gone by Charlaine Harris – what happened to this series?

I was about to give up or at least go back and read New Moon for the 3rd time since the movie is coming out in 31 days!!! Instead, something made me go back through my Kindle to see what else I had to read. I noticed that the last book I read that I really enjoyed was Afraid by Jack Kilborn. I had mentioned that I was reading it after I had downloaded a free e-book by him and Blake Crouch that was truly one of the most disturbing short stories I ever read. I ended up checking out some other books written by Jack Kilborn and I found this digital download for only $1.99 that has 55 short stories – 55 Proof – Jack Daniels and Other Thriller Stories. 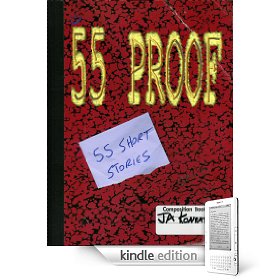 It is divided up into sections; Jack Daniels and Friends, Crime Stories, Horror Stories, and Funny Stuff. I skipped ahead to the Horror Stories. Some of these stories are SO disgusting. For example a guy that is trying to break the world record for the number of pull ups he can do. He ends up paying this plastic surgeon who previously lost his medical license to cut off his legs so he would weigh less. When that didn’t work he goes even further with getting rid of body parts….yuck! Another story is about a mother and son who end up feeding off of one another to stay alive. Pretty gross and graphic, but perfect timing for Halloween right? Ken keeps saying he wants to take me to a haunted house because he thinks it’s hilarious how scared I get. I’m a screamer! Anyways, if you have a Kindle or a Sony reader (they sell them at the stores now, like Best Buy and Target) and like scary books – it is totally worth the $1.99!

What the scariest book you’ve ever read?