Better late than never right!! I haven’t been spending that much time on my computer other than when I am working. Which ironically I am supposed to be working right now. I figured I better get our Christmas photos posted before the month of January is here and gone.

You can look through our Christmas photo album here at Flickr. 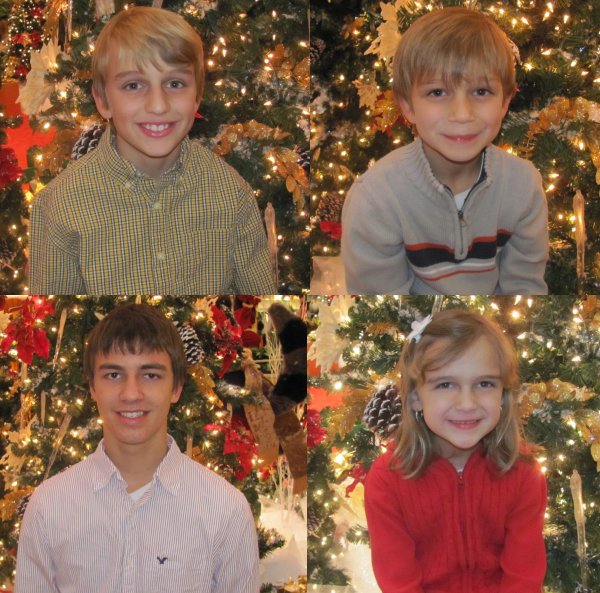 Let’s see what I can remember from our Christmas festivities… This year Andrew was with us on Christmas Eve so Santa came to visit our house a night early. Isn’t it amazing how Santa knows to come early every other year? This was the very first year the kids had actually questioned Santa’s ability to know that he needs to drop off their presents a day early. Chase was very concerned that Santa might not realize he needs to drop off ALL their presents a day early, not just Andrew’s. (Andrew spends every other Xmas day with his dad.) Christmas Eve morning Ken and I woke up at 8:30 and we had to wake the kids up! Lazy kids! This year the kids didn’t have too much on their Christmas lists. Andrew wanted the Dr. Dre Beatbox which sounds amazing by the way. Blake isn’t into a whole lot right now so we got him the Playstation Move with some games and a bunch of other stuff he probably didn’t want. Chase is big into Pokemon cards and Beyblades right now so he was easy to shop for. They both got remote control cars from Santa to take down to the park where they have a pretty neat track set up. Karli is the easiest to buy for…I could spend so much on her, but Ken keeps me under control. She got a guitar from Santa, the Calico Critters house with a bunch of accessories, Squinkies, Zoobles, Furry Frenzies.

At our house we always have one big present from Santa and then everything else is from Ken and I. How do you do it at your house? I hear a lot of people have pretty much everything is from Santa and then just things like clothes, socks, etc…from Mom and Dad. Heck, all the work involved…I want more credit than that!

Once again we DIDN’T get to take a vacation when I wanted to. We had several discussions with the kids about taking a vacation the day after Christmas through New Years. We talked about Cancun again, but the kids kept complaining that they would be bored just hanging out at a hotel all day. I would get online and show them all the different hotels with activities for kids, snorkeling, water slides, etc… and they would just roll their eyes. Ken and I kept thinking, why spend the money if they really don’t want to go?? Finally we decided to give the kids one last chance to take a vacation by offering them the option of going somewhere tropical or getting a hot tub for our backyard. Without hesitation they all voted for a hot tub. So the day after Thanksgiving we had our hot tub delivered. You didn’t have to tell Ken and I twice that they wanted the hot tub instead. It’s crazy, but when we had the patio concrete poured back in 2001, we had a thicker slab poured in one spot for the intentions of getting a hot tub someday. Here we are almost a decade later, we finally got it! We use it all the time and it has been the best decision we’ve made. We trek right through the snow to get to the hot tub if we have to. My favorite time to go in is at night. I’ll put my iPad in a Ziploc bag just so I can read while relaxing!

Guess what? I FINALLY have pictures of my kitchen to share. Can you believe it’s been a year since we started this project? I wanted to wait until we had every last detail complete before sharing the pictures. We finally ordered our blinds, which was the last and final touch. I’ll get those posted next!